This is an NSF-funded project to use tree-rings for the reconstructions of paleoflooding and associated large-scale climate forcing in the Mississippi River drainage basin. Jon Remo in the Department of Geography and Environmental Resources, Southern Illinois University is a co-investigator on the project. Below you can read some details about the project.

Determining the true natural variability of flood frequency and magnitude is an important issue not only as is relates to traditional areas of concern such as hazards to life, property and infrastructure, but also in terms of placing extreme climate events experienced in the modern period, into a long-term context. Prior to the mid-to-late 19th century, instrumental records of flooding are limited in the region, particularly in the western tributaries. This lack of long high-resolution records of flooding hampers attempts to quantify the potential range of flood severity and temporal patterns of occurrence (e.g., Klemes, 1989). The development of quantitative tree-ring reconstructions of flooding in the MCR will provide the data necessary to understand the nature and causes of long-term flood variability in the MCR that instrumental period observations cannot.

Paleoflood Hydrology is the study of the frequency and magnitude of pre-instrumental floods using geological or botanical evidence (such as tree rings). Paleoflood hydrology can provide hydrological scientists and engineers with unique information about flood intervals, maximum flood magnitude, and the impact of climate variability. 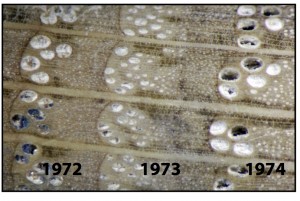