One of the best trips I took this summer was to Columbia Missouri to see my good buddy Mike Stambaugh and take a sample from the huge Bur Oak cross section they have in their lab. This tree was the National Champion Bur Oak until it died in the early 1950s. It had been growing in Big Oak Tree State Park in the Bootheel of MO. This site is one of the only virgin bottomland hardwood forests left in MO, and is where Emma Bialecki and I first started our research on flood rings. I wanted to get a sample from the Big Oak because it reportedly dated back into the early 1600s and I was hoping it would add to our flood ring chronology from the park. In the picture you can see Mike cutting a narrow sample from the back of the cross section, which was a nightmare to move from it’s normal location. It probably weighs at least 300 pounds. 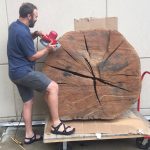